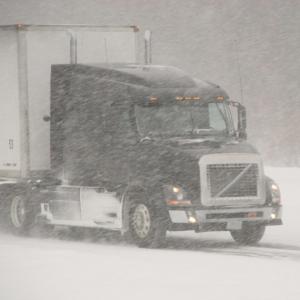 Polar Vortexes, violent storms, droughts. Mother Nature has caused quite the stir this year – and we’re not even through March. What’s been the impact on transportation networks?

With state-of-emergency highway and interstate closures in the Midwest slowing down truckers, and freezing temperatures hampering equipment, then, daylong closures of two major ports in New York and New Jersey twice this past January, it would be impossible for the freight industry not to feel the chill. But as the dominos of backlog start to connect, things could actually be getting robust for the coming months.

The numbers are out for February and despite the weather, they show overall strength. The most recent report from the Cass Information Systems Freight Index – a measure of shipping activity based on $20 billion in the paid freight expenses of about 350 American shippers – shows that February freight shipments were up 7.3 percent compared to January, though they were down 0.4 percent compared to February 2013.

Freight expenditures also had an increase from January to February of 6.8 percent and 6.4 annually. From first appearance, that’s great news but looking at overall trends, the figures are cause for sober thought: it’s the weakest January to February gain since 2010, a result that could be from the economy’s (slowly) returning strength getting curtailed by all this weather.

The Institute for Supply Management also recently released their latest report and it shows traction for a backlog of orders stemming from the harsh winter, along with decent traction for new orders. This could very easily translate into increased production in the coming months and this, of course, means more freight.

The way things appear from the trucking side of things is that while analysts say capacity is exactly the right level for today’s volume of freight, it could be inadequate if those new and backlogged orders cause a surge, thus stretching capacity tight. Shippers and carriers, however, will tell you that capacity is already tight, in part because of this brutal winter, as well as volume gains.

As we know, things are interrelated. From regulatory changes to weather patterns, a lot goes into how markets behave and how it effects those who need to ship freight. A recent study by the insurance company, AGCS calculates that variations in weather could affect the US economy by as much as $534 billion a year. Is that something we’ll be seeing soon? It’s difficult to say. What is for sure though, is that it’s important to keep your finger on the transportation pulse so that you can make the best decisions for your business.

At Action Transport Inc., we make it our priority to monitor activity in supply chains and keep our valued customers up to date on transportation trends. We’ve been a family-owned company helping businesses move their freight for over forty years. The secret to our success is simple: Low Rates, Great Customer Service. Get an online freight quote today and let’s get you moving!